It is happening now.

Set and save your favorite way to search.

Sorry, no geolocation data could be recovered for your device. Please fill the form fields below to force the detection of your current geolocation.

Start typing what you are looking for.

What are you looking for?

Where do you want to go?

Deschutes County Commission voted to approve the new resort, but an appeal is likely. 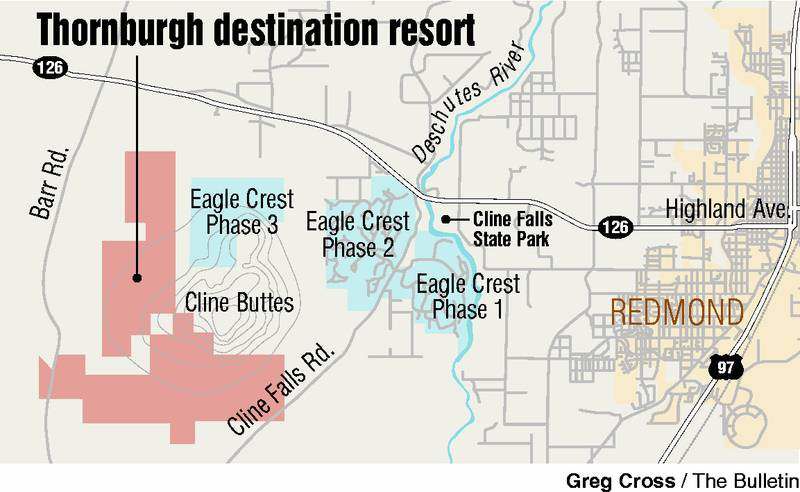 The Thornburgh Resort is one step closer to becoming a reality.

On Wednesday, the Deschutes County Commission voted to approve the site plan for the first phase of the project, which essentially lets the developer, Central Land: Cattle Co. LLC, move forward with building an 18-hole golf course and irrigation lakes along Cline Falls Highway between Bend and Redmond.

Other aspects of the resort, such as designs for parking and buildings on the site, would be reviewed in a separate site plan review at a later date, said Will Groves, a Deschutes County planner, at the meeting Wednesday.

When completed, the whole resort is expected to have 1,000 homes, 475 overnight units and three golf courses.

“This is an interim decision among many that are pending,” said Commissioner Phil Henderson on Wednesday.

But this project, which has been appealed multiple times since it was first introduced in the mid-2000s, will likely be appealed again, stalling any progress that could be made by the developer.

“To my knowledge, it is the most litigated local land use proposal in Oregon’s history,” said Peter Gutowsky, the planning manager with Deschutes County.

The resort has faced controversy and multiple appeals over the past 10 years. These concerns, raised by Central Oregon LandWatch and Deschutes County resident Nunzie Gould, center around how the golf course affects wildlife and whether the resort has secured enough water to operate without negative impacts to the environment.

Kameron DeLashmutt, the property’s developer, submitted a site plan for review last year, which was approved by the county’s planning staff in April.

Gould and LandWatch appealed this decision, arguing that the county has no jurisdiction to make a decision about this site plan. That is because a separate part of the project, called a partial subdivision plat, which outlines how parcels of land are laid out, has been appealed to the state Supreme Court.

Gould argues that the site plan review for the golf course can’t be decided until the Supreme Court issues a ruling.

Commissioners decided that the site plan review for the golf course and irrigation lakes was separate from the subdivision issue.

Opponents also argued the developer needed a reservoir permit for the irrigation lakes before he could move forward with developing the golf course.

But the commission decided this argument, among others made by the opponents, were outside of the scope of approving the plan for the golf course, and was brought up too late in the permitting process.

Neither LandWatch or Gould responded to a request for comment in time for publication, but given the project’s history, Gutowsky, a Deschutes County planner, said he would be surprised if the approval decision weren’t appealed.

News and information where you want it — on the web, on your phone, on your front porch. Covering Bend and Central Oregon for over 100 years.